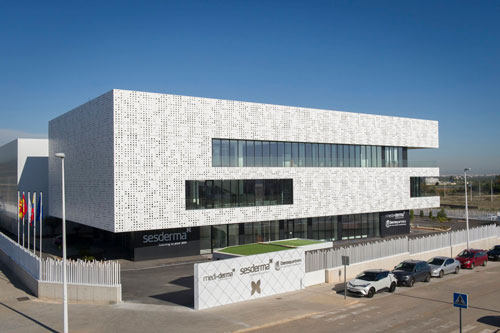 This year, our company will turn 30. With its head office in Valencia and founded by Dr. Gabriel Serrano, Sesderma is today in a leading laboratory in dermocosmetics thanks to its successful internationalization plan and a steady commitment for innovation and research. Our creams, serums and professional treatments are currently present with in more than 70 countries, the Chinese public are riveted by our products, which are warmly praised by influencers in their social media, worldwide.

This 30th anniversary establishes us as one of the most reputable companies in the field of dermocosmetics. And more importantly: with a bright future ahead of us, thanks to the tremendous response secured by our products from customers and medical professionals far and wide. Our raison d’être is the health and well-being of people, achieved through actively listening to the skin of our patients. This work philosophy, together with the quality and innovation applied to the development of our products and treatments, is what has consolidated us as one of the first Spanish labs in Asia and Latin America, in terms of business volume.

Since its inception in 1989, Sesderma has revolutionised the field of dermocosmetics thanks to its constant commitment to R+D+i. We currently trade in more than 70 countries, hold 21 subsidiaries in the most strategic markets, and employ more than 900 staff including the new head office in Puzol (Valencia) and our subsidiaries, globally. Furthermore, the familiar nature of the company is tangible since, from an early age, his two elder sons Gabriel and Juan Manuel were actively involved, holding today the CEO and Vice-President positions, respectively.

Dr Gabriel Serrano, dermatologist and founder of the laboratory, acts as its President and travels the world hosting master classes and conducting symposiums in the major world congresses. But when in Valencia, the doctor goes out of his way to attend his dermatological consultation at the clinic, an evidence of his true passion for his work and patient care.

During this time, the popularity and efficacy of both Sesderma and the Mediderma  Professional Care treatments have grown on a par with its turnover. Indeed, in the last three decades the sales have increased steadily and in the last years they have reached three-fold figures, with a turnover going from 33 million euros in 2014 to 80 million in 2018, that is almost 20 million more than the previous year.

One can’t mention the success compiled by Sesderma worldwide, without speaking of the enthusiastic figure that is its founder, President and alma mater, Dr Gabriel Serrano. It is precisely the endeavours of this dermatologist, from a family of Colombian doctors, what steered him to founding the laboratories in the late 80’s, with the aim to find solutions for each skin problem.

From then on, and despite the huge prestige inspired by many of his products, his philosophy remains the same through and through: to offer tailor-made solutions for each skin need, profitability aside. To achieve his dream, the former Chief of clinical dermatology of Hospital General of Valencia for more than 25 years, created Sesderma at a time when dermocosmetics was still in its infancy.

Then again, Dr Serrano has always been aware of the fact that the efficacy of a good treatment goes hand in hand with research and innovation. It was the need to find solutions for conditions such as vitiligo, acne or psoriasis, which drove the creation his own R+D+i department, where more than 600 products are formulated, as well as professional treatments aimed at every skin problem. His extensive catalogue encompasses skin’s health and beauty in equal measure, amid innovative solutions to combat wrinkles, remove spots or revitalise skin. One of the starring products is C-VIT, the line with vitamin C most sold, and the genocosmetics lines Sesgen 32, Factor G and Reti Age.

Sesderma was the first laboratory to introduce glycolic acid (an active with countless moisturising, exfoliating and regenerating properties), pioneer in wrinkle filling at a topical level,with hyaluronic acid and collagen spheres. In 2008, in the midst of the recession, it started applying nanotechnology in the development of its products. An advance that assures efficacy and is involved in a complex process. To achieve it, we encapsulate actives (ingredients such as vitamin C,retinol – derivative of vitamin A – or hyaluronic acid) in liposomes, which allow us to reach the origin of the problem, acting where it is needed.

“Sesderma listens to the skin, and by doing that, it listens to people” as proclaimed by Dr Serrano, who frequently points out that “people are above everything”.

That the values that inspired our laboratories are the same as those applied by Dr Serrano has nothing to do with chance. In its daily business, the know-how, generosity and humanity are the principles that entirely transpire from the company culture.